The animals’ behaviour in the terraria

The terraria are used for one individual adult earless monitor lizard, in pairs or for one male or several female animals. The joint keeping of two adult male animals is problematic and may lead to serious fights between themselves; although a joint keeping of male earless monitor lizards might go well for quite some time. A behaviour similar to combative rituals could repeatedly be observed in the terrarium that led to the separation of the male animals after all. In the process of the observed behavioural patterns, the opponent counterparts embrace each other at the neck under water and entangle themselves with their bodies and tails. This may lead to the fact that both entangled bodies lever themselves almost vertically out of the shallow water for a few seconds. The entanglement dissolves and the animals move away after plunging into the water again.

According to experience gained so far, juvenile animals may be held together in groups until they are six months.

Earless monitor lizards are admittedly mainly crepuscular and nocturnal animals, yet this does not exclude that they may also be observed during the day sometimes. In this mode, they are lying in the water, often for hours. This frequently occurs at places where climbing plants embedded in the water or respective artificial plants provide shelter. In this move, the frontal part of the skull with the nostrils protrude above the water level and the whole skull emerges from the wet element from time to time, and then they submerge again. 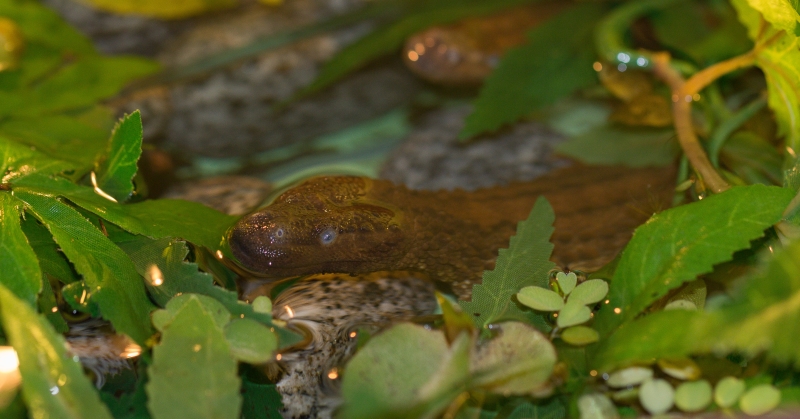 In this position above water, Lanthanotus utters ‘squeaking’ sounds from time to time the meaning of which is not clear so far. Adult animals however spend the day hidden in their shelter or hiding boxes on a regular basis. Thereby, they also like to burrow their whole body in the humid ground substrate of the hiding boxes.

Earless monitor lizards can remain completely motionless, ‘frozen’ for hours or days and stay in their shelter or entrenched in the substrate in exactly this way in a sort of prolonged sleep. In this move, they bend their extremities close to the body. The animal owners initially assumed they were dead. Not until the supposed lifeless bodies were moved or laid in water, did the animals wake up from their ‘deep sleep phase’, flick their tongue and move as if nothing had happened. The author is aware of similar behavioural patterns as far as the crocodile lizards Shinisaurus crocodilurus are concerned. In this move, the young stock occasionally drift supposedly as dead, yet de facto ‘asleep’ on the water surface.

However, the main activity of earless monitor lizards is at twilight and during the night. The shelter or hiding box is left on a regular basis and the water area is sought sometime after switching off the lights. Yet prior to seeking the water area, the animals often rummage through mash panels. Food - e.g. the large reddish worms species Lumbricus terrestris - found ashore, will however regularly be dragged under the surface of or into the water and consumed only there. The allegedly lethargic behaviour of earless monitor lizards changes radically anyway when food comes into play.

Earless monitor lizards have a distinctive olfactory sense. They track their prey by an increased flicking of their tongue frequently accompanied by rapid head movement. This probably serves the purpose to fix and locate the food animal more closely. Under water, the eyes are usually protected by semi-transparent eyelids.

A propos food: Earless monitor lizards are not necessarily exceptional food specialists. At the beginning, feeding is frequently quite difficult and with much patience only. First observations expected them to consume fish preferentially. Even first food portions for the animals held in terraria consisted of fish stripes (Klemmer, K., 1971). Meanwhile, this specialization in particular food has not been confirmed based on many years of observations of different animal holders.

Besides small feeding fish (‘Poeciliidae’: small tooth carps from aquaculture), also fish pieces of freshwater fish (trout), and shellfish flesh and shrimp meat (both fresh water) are consumed. However, also nest young mice will not be disdained by adult earless monitor lizards, yet should be offered occasionally only. 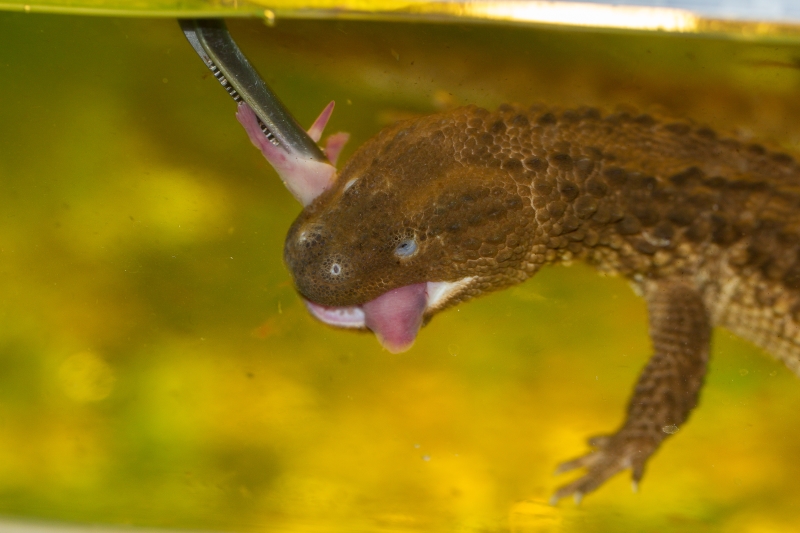 However, large reddish worm’s species Lumbricus terrestris are particularly high on scale as far as food animals are concerned and may be acquired as something like fishing lures in relevant shops. In this context, 2 to 5 worms will be consumed per feed alley. A few worms will be sprinkled with commercially available vitamin powder at irregular intervals. The earless monitor lizards turn the worms – once being placed between the jaws – in a way that they may easily draw them jerkily into their mouth and consume them. 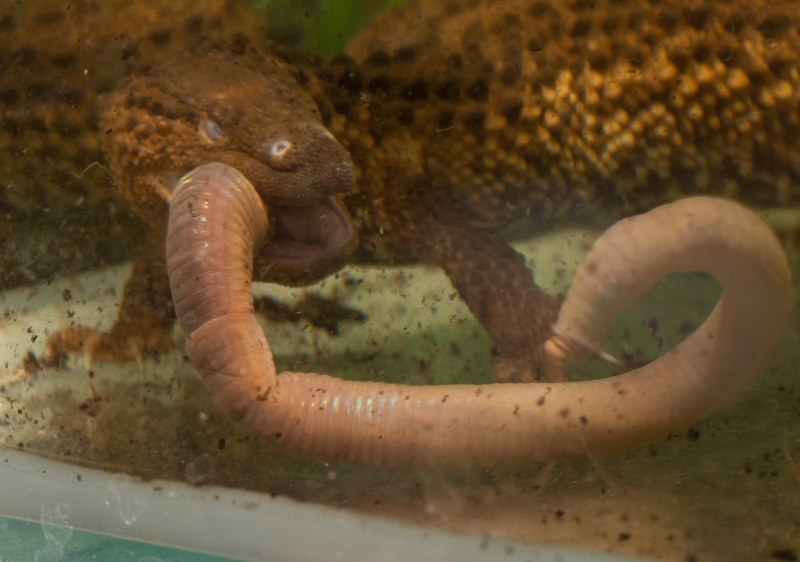 It should be noted that health complications (digestive disorders) could occur in the case of feeding reddish worms named Dendrobena. Their feeding is therefore not advisable.

Adult Lanthanotus will be fed at most once or twice weekly, whereas extended feeding pauses of e.g. one week may be taken at irregular intervals. Adult animals however frequently take feeding pauses over several weeks during the course of the year on their own initiative. They may particularly be observed at regular intervals prior to and during the time they shed their skin.

Young animals will be fed every two days.

Food certainly also includes digestion. Earless monitor lizards defecate while being in the water only, while the defecation and urinary excretion frequently happens explosively after an extended rest period onshore and shortly after they have submerged in water.