After hatching, the young earless monitor lizards have a total length of 10.5 and 11 cm. As far as the outward appearance is concerned, they recognize the smaller image of their parents, yet have a small bright spot on top of the scull that fades only after a few months. There are no observations or insights into the significance of these spots.

After leaving the eggs, the hatchings could be placed in a standard plastic box (Fauna Boxes), e.g. in the dimensions 60x30x20 cm (length x width x height) the base area of which is filled with water, e.g. the water level amounts to 3-4 cm. A functional and well-structured equipment is to be ensured for those breeding boxes as well. Layered moss panels lying on a flat stone have proved to be valuable for the young earless monitor lizards for protection purposes. Other breeders cover half of the base area of the breeding boxes with Spaghnum, which is 5 cm in height. The other part of the area is free and will be separated from the Spaghnum area with layered cork panels. However, the entire base area is covered with a water level of 4 cm that the Spaghnum is mainly covered with water.

A few moss- and cork panels cover the surface of the Spaghnum. Water- and air temperature correspond to those of the parents’ terrarium. The water will be changed on a daily basis for this kind of animal keeping.

The little earless monitor lizards may initially be raised in groups in the breeding boxes. The animals rest between the moss panels or entrench themselves almost completely in the wet Spaghnum while they stick out the tip of their snouts with their nostrils from the substrate.

The animals also like to lie under the cork pieces on the surface of the Sphaghnum, which is permeated by water.

Initial feeding experiments with worm pieces – initially not larger than 0.3 cm to 0.5 cm – were successful after a period of 8 to 10 days after the hatching. Each young animal should be fed individually; the piece of worm should thereby be specifically given with a feeding tweezer.

Over time, young earless monitor lizards become extremely jealous about food and are even more ‘bustling’ with regard to their predatory behaviour compared to their parents. Flickering and hectic head movements may be observed more frequently. A non-targeted, uncontrolled feeding repeatedly showed that young earless monitor lizards extremely fought with one another for food. In this process, it might occur that the animals try to snatch feed pieces they once located, even out of the mouth of a competitor. In case two or more little earless monitor lizards fight for the same feed piece, crocodile death rolls may be used in rotating around their own axis several times to ‘unscrew’ the feed piece from the mouth of the other small lizard. In the heat of the moment, limbs or toes may thereby be accidently affected.

The young earless monitor lizards develop well with respectively good feeding and grow within approximately 3 months after their hatching already to a total length of 15.5 cm and 15.9 cm, thus a longitudinal growth of about 5 cm. After one year, the sub-adult animals reach an entire length of 23-25 cm. 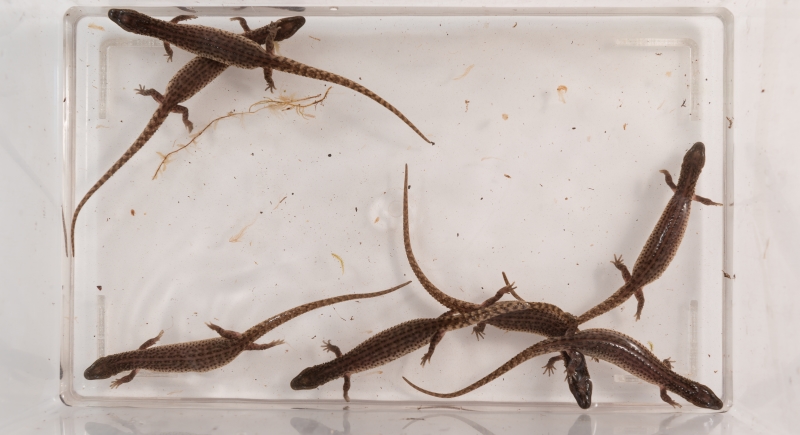