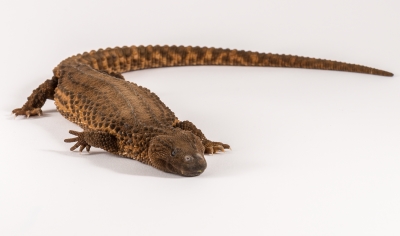 The earless monitor lizard lives – presumably endemically – on Borneo or should one say: thus far, evidence of the reptile has occurred on Borneo only. Previous sightings thereby comprise the northeastern and northwestern part, particularly the Malayan (Sarawak) and the Indonesian part (Kalimantan) of the tropical island. More recently (2008), the lizards were scientifically documented (Yaap, B., et. al. 2012) the first time on the occasion of a research project for exploring the biodiversity in an area in Situ being important for the palm oil industry.

The earless monitor lizards live in the environment of smaller flowing waters and were found in the base area lying below leaves (Yaap B., et. Al. 2012).

Further evidence outside Borneo is currently scientifically not confirmed.