Reports on the keeping of lizards are rare. According to allegedly lethargic, hidden habitat of the animals, older reports (Mertens, R., 1964; Klemmer, K., 1971) assumed that the animals could be kept in small scarcely equipped boxes, if there was still even the slightest possibility for the animals to entrench in damp substrate.

The fact that this lethargic behaviour is admittedly a part of the animals’ natural lifecycle, will be described later, however, Lanthanotus can also behave differently…

A single accommodation for one adult animal is accordingly best or in terraria in pairs that should - according to extensive experience in the past – ideally fulfil the following minimum standards:

Large, relatively shallow expenses of water, a good structure and – at least partly – relatively dry elements of ground with hiding boxes, cave or other hiding places.

The terraria for earless monitor lizards basically correspond to those of the well-known standard terraria. The roof of the terraria provides a ventilation stripe of 5 cm in width made from perforated sheet extending over the entire length, and the terraria are equipped with front sash windows.

As matter of principle, a relatively large base area is to be ensured, the main part of which also forms a well-structured water-part glued in the terrarium. The water level should thereby be at approx. 8 - 10 cm (3 – 4 inches). The water temperature will be held at a constant level of approx. 25°C by means of a bar heater installed in the water zone; the water will be purified by means of an exterior filter. In this process, the water is frequently redirected into the water basin by means of a diffusor that creates a certain water flow in the main part of the water zone. A (partial) water change is to be performed on a regular basis, preferably daily, however at least weekly.

The water zone should be divided into several areas. For instance, partial water sections are created by stuck glass stripes that form shallow water sections on the one hand or transition zones to the land-part. While many owners do frequently not equip free water zones with substrate for hygiene reasons, the smaller partitioned water zones are covered with course, round pebbles or fine-grained aquarium gravel. A small spotlight with 23-35 watts may be installed above this area that heats the ambient temperature and particularly the shallow water area selectively and locally to a limit of approx. 28°C. In this context, it is important to ensure that the water temperature will not be heated above 25°C across the entire area. A too high water temperature regularly leads to the fact that the animals do not like to be in the water area anymore and retreat onshore also at night. The selectively warmer water partitioned from the main water zone by the gravel bed will however be visited appreciatively and they remain there hidden between the round pebbles, often for hours. A small decorative cork pipe may also be placed on the pebbles as resting place – half covered with water – the inside of which will also readily be used as resting place. The main part of the water zone will in part be densely equipped with artificial (plastic) plants or with real climbing plants (Scindapsus). Nevertheless, an adequately large part of the water zone has to remain free.

A hiding box (cavern) has been proven appropriate as most important structural component among the Lanthanotus caretakers. 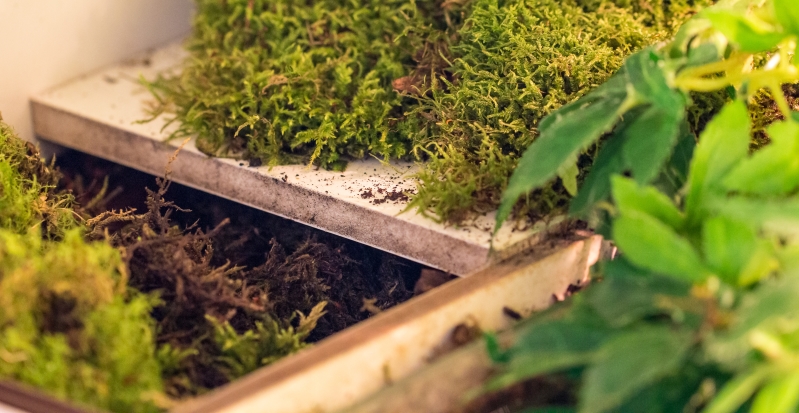 This hiding box is constructed with a plastic top panel being approx. 1 cm thick that serves as partial covering of the remaining area of the terrarium provided as land part. The panel simultaneously forms the basis for a ‘ground-level’ area equipped with moss-covered panels that are at the same level as the surface of the water. The cave area under the cover, in other words the real hiding box will partially be coated with humid Sphagnum and forest soil. The earless monitor lizards are attracted to stay here during the day.

Thereby, they dig into the humid substrate or rest on the humid moss. The other part of the cave, which should be separated from the humid part of the cave by a glued-in glass stripe of 2 cm in height, forms a dry area. This area is 2 cm high and covered with fine-grained aquarium gravel. A layer of dry leaves will be spread on top. Even if one decides to refrain from installing a hiding box in the terrarium, the provision of a drier, protected area is important. For this process, other animal owners separate a protected area on the land part of their terrarium that is equipped with a mixture of humid coconut mulch and fine garden soil, which is covered by moss or cork panels. The Lanthanotus use this drier part of the terrarium to lay their eggs… however, more details will be provided later…

The air temperature in the terraria fluctuates between 25 – 28°C during the day and 21 – 24°C during the night. In this respect again, a constant temperature level is to be ensured. The terraria will be heated by the already mentioned spotlights or – if required – by additional structurally identical spotlights that are installed in the roof of the terraria. LED stripes or energy-saving lamps may serve as additional lighting; these light fittings, including the spotlights, should be switched on for approx. 10 to 12 hours during the day.